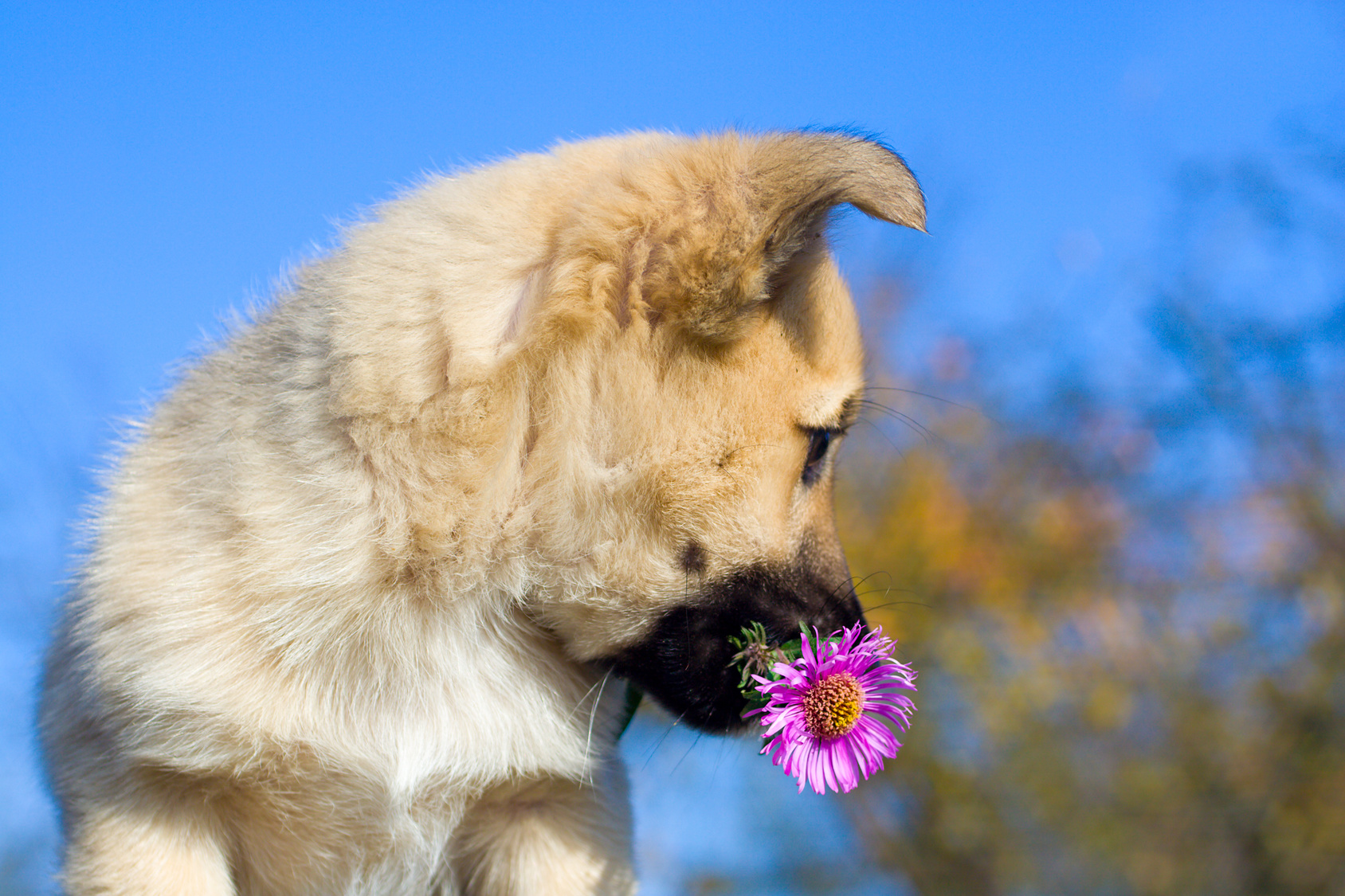 Spring is here. This season is known for the flowers, the blossom. The odors of flowers are very pleasing to most of us. I thought this might be a good time to discuss the incredible sense of smell our dogs possess.

Our main sense as humans, is vision.  Imagine being able to tell by looking who was in our vicinity, how long ago they were there and whether they were stressed or not. This is exactly what dogs can do. The dog’s awe-inspiring nose is capable of knowing people and animals that were in the vicinity, how long ago they were there, what direction they were going and whether they were sick, healthy or stressed. The dog’s nose also detects humidity and electric charge. This is why a dog knows if a storm is coming.

Dogs communicate in fumes. Their nose is wet to pick up more odors. Bloodhounds have very long ears so they kick up the dust to detect more odors from the ground for better smelling.  Let’s talk about the anatomy of a dog’s nose. When I say nose I am referring to all parts involved with the sense of smell such as nostrils, length of snout, receptors for smell and the part of the brain involved.
Think about this for a few seconds…we have three sensory receptors in the eye to see all the colors and definitions of our world. Dogs have over eight hundred nasal sensory cells! Nasal epithelial cells process odors. If you were to remove them from a dog and spread them out they would cover the entire dog’s body. If you were to remove our nasal epithelium and spread it over our body it would only cover the size of a skin mole!

Did you know dogs exhale out of the side slits of their nose to minimize loss of an odor? Dogs also use different nostrils for different smells . If the odor detected is new and pleasant or neutral the right nostril will take it in first then move it to the left nostril. The odor of adrenaline (fear, stress) will be inhaled by the right nostril and never make it to the left nostril .

I always thought dogs marked their territory with urine. This is not the case. Watch where your dog actually marks. They don’t go around urinating the perimeter of their living area. A “second nose” dogs possess is called the vomeronasal organ . This lies above the roof of the mouth.  Odors must be dissolved (nor airborne) to be detected. This organ is used to detect pheromones. Every animal of a species recognizes a pheromone. When a member of that species receives the pheromone signal it should elicit a specific behavior.  There is a spray and collar on the market called Dog Appeasing Pheromone (DAP) which elicits a calming behavior .

If you were to walk in a house where cinnamon rolls are being baked you would smell them right away. The dog entering the house smells one trillion cinnamon rolls!  I ask you all to think about the intensity of smell your dog experiences before you have the groomer apply perfume.

Dogs can detect so much with their sense of smell.  They can find drugs, land mines, smuggled agricultural products or endangered species, lost people and dead people. These are just a few of their capabilities! Dogs are better than sonar for finding a drowned person! Dogs have found people buried under twenty-four feet of snow after an avalanche ! Twenty-four feet !

People and dogs need to sniff to pick up an odor.  How many of you have actually sniffed something today?  Most of us just inhale and exhale with out noses. My hope is that everyone reading this will look at their dog’s nose in a new way. The dog’s nose is an incredible evolutionary adaptation allowing your dogs to smell the way they do.

As you walk around this wonderful season take time to stop and sniff the flowers .